Better Estimation When Perfection Is Unlikely: A Bayesian Example

TL;DR The simple estimator \(\frac{1 + \textrm{ Number Successes}}{2 + \textrm{ Number Attempts}} \) is better than \(\frac{\textrm{Number Successes}}{\textrm{Number Attempts}}\) when "success" is unlikely to happen 0% or 100% of the time. Such situations are often the most interesting and worthy of measurement. This article derives this Bayesian estimator and considers why it is better when perfection is unlikely.

Let’s say we want to estimate the probability of an event, like a sale. We want an estimate because we are considering repeating the situation that led to it, say a sales pitch. The standard way to estimate this is to take our data so far and use:

Unfortunately, this method doesn’t produce a very good estimate with small amounts of data. It is ridiculous to conclude that a visitor will always make a purchase just because the first visitor did. But, a 100% chance of success or failure is the point estimate \(\frac{\textrm{Successes}}{\textrm{Attempts}}\) gives after a single visitor makes a purchase.

These “small data” situations are actually pretty important. Every post has its first few votes, every website its first few visitors, and most businesses their first customers, but not all of them continue long enough to get lots of data. Even in very large data sets, say visitors to a search engine, specific situations often have small amounts of data, like the probability that a visitor searching for “an image of a hippopotamus on a hill at sunset” will be pleased with the results. Each individual small data situation may not matter much. However, there are tons of these situations. Together they matter.

We are smart people; let’s see if we can find a better way to estimate in these small data situations.

If you don’t care about the math and just want to know about the result, now is a good time to jump ahead.

We want to find what values \(\pi\) is likely to have, given the number of successes so far, \(P(\pi| y)\). To work that out, let’s start by figuring out the expressions on the right side of the equation.

Because the event is repeated and there are only two possible outcomes (success and failure), let’s use the binomial distribution to estimate the likelihood of a particular number of successes.

Because this function tells us the likelihood of particular \(y\) values given the value of \(\pi\), we can use it in the place of \(P(y | \pi)\) in Bayes Theorem above.

We’ll probably want to use this estimator in situations where success isn’t likely to be certain (100% chance) or impossible (0% chance). After all, a lot of the situations worth measuring are the ones where success is somewhere in between. Beyond that, we don’t know much about the likely values of \(\pi\). Given our lack of knowledge, let’s assume that \(\pi\) is equally likely to be any value between 0 and 1. So \(\pi\) is just as likely to be 34.5% as it is to be 100% or 2.72%. We can represent this assumption by using a uniform “prior.” In other words our starting estimate of the probability distribution of \(\pi\) is just a flat line between 0 and 1.

Because this function estimates the likelihood of \(\pi\) before we have any data, we can use it in place of \(P(\pi)\) in Bayes Theorem.

When we use the above functions in Bayes Theorem we get the following.

Which we can use to find a probability distribution for \(\pi\). 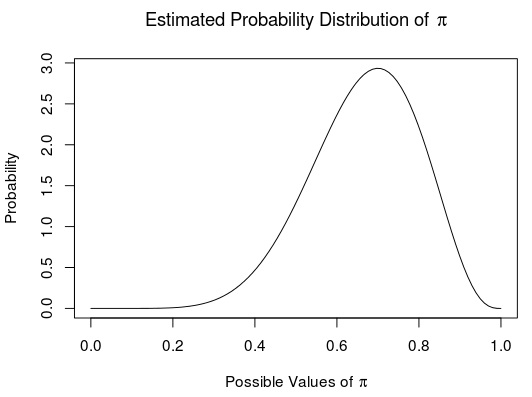 As cool as the probability distribution is, it can be a little unwieldy. If we want to rank situations based on the probability of success, it would be a lot easier of we just had a number.

The single number that best estimates the value of \(\pi\) happens to be relatively easy to find. It is the expected value, or average, of our estimated probability distribution. This expected value minimizes the “mean square error”, a common measure of how far our estimate is from the actual value of \(\pi\). Because the probability distribution we found above is a beta function, we can take its parameters and plop them into what we know is the expected value of a beta function.

It nicely works out to a simple fraction, much like the classic estimator of \(\frac{\textrm{Successes}}{\textrm{Attempts}}\).

Let’s see if our Bayesian point estimate works better than the classic \(\frac{\textrm{Successes}}{\textrm{Attempts}}\). Let’s say we flip a coin and it comes up heads. Here are our two estimates of the chances that a flip of this coin will come up heads.

The Bayesian estimator seems more reasonable in this situation.

What about large data sets? Lets do the same thing but with larger numbers. Let’s say we run a website that has had 1000 visitors. We know that 854 of these visitors clicked a particular link. What is our estimate of the probability a visitor will click that link?

These methods give us pretty much the same estimate. 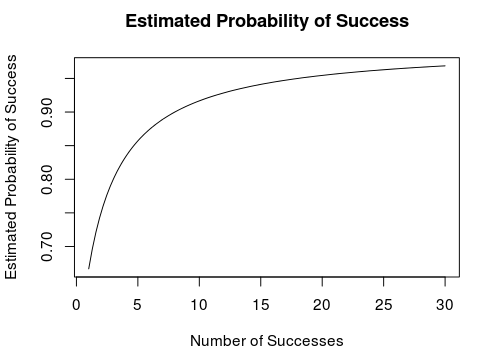 That seems to roughly follow our intuition. One happy customer doesn’t make a sure thing. But when you get 30, you figure success is actually really likely.

This Bayesian estimator, \(\frac{1 + \textrm{Successes}}{2 + \textrm{Attempts}}\), compares pretty well to the standard estimator, \(\frac{\textrm{Successes}}{\textrm{Attempts}}\). It estimates the probability of success more cautiously for small data sets, comes to the same conclusion for large data sets, and adjusts its estimate as it gets more data. Because of this, it is better suited to the situations we are most interested in measuring; the ones where the chance of success is unlikely to be either guaranteed or impossible.

If you like my work, consider connecting to me on LinkedIn.